The Lesbian Gay Bisexual Transgender Center’s mission is to enrich the experiences, foster success, celebrate victories, and affirm the existence of Penn’s LGBTQ+ undergraduates, professional and graduate students, staff, faculty, and alum using the lenses of social justice and intersectionality. Through education, support, and advocacy, the Center cultivates a campus climate where all students, regardless of their gender or sexual identity, can live authentically. 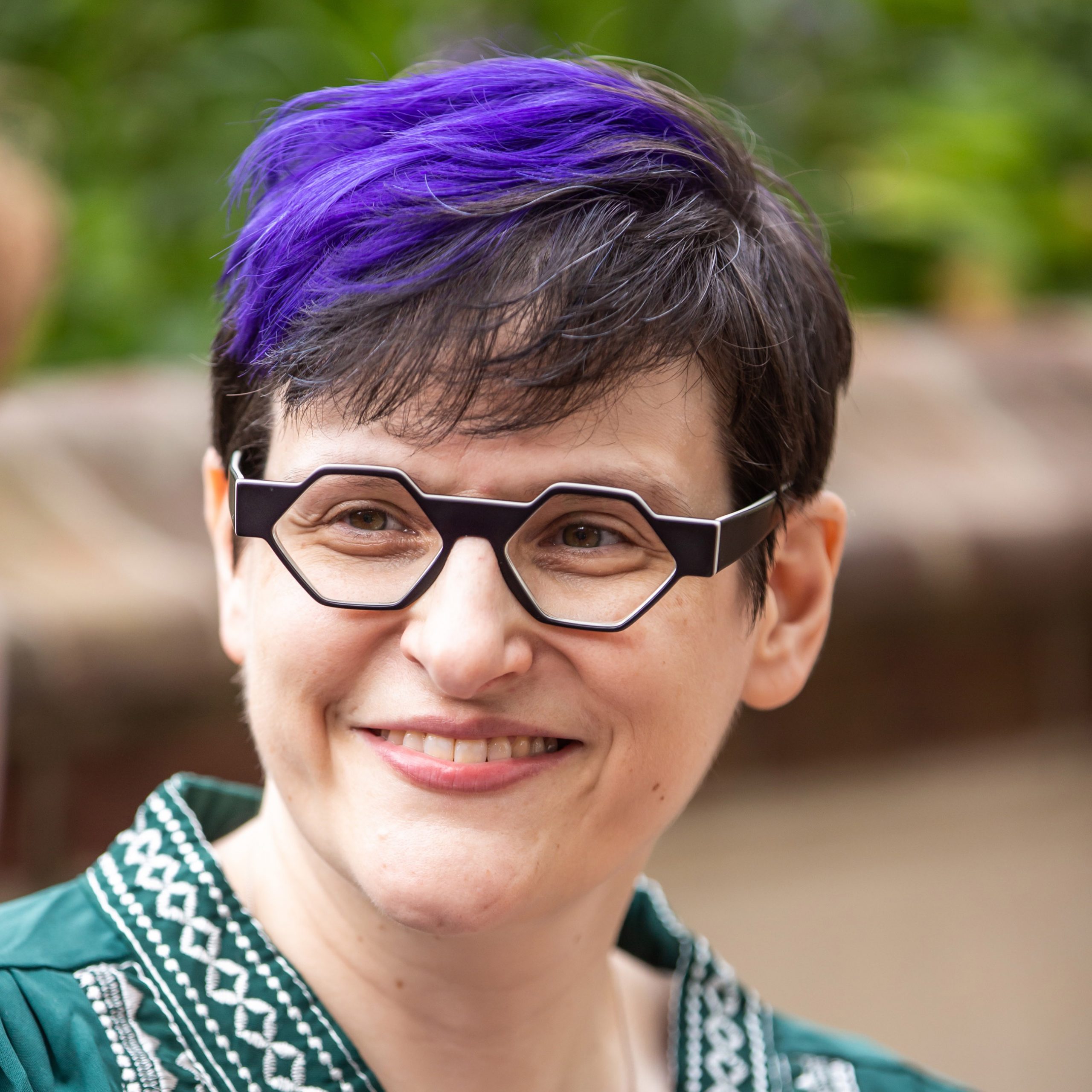 Dr. Erin Cross is the LGBT Center’s Director, where she has advocated for and expanded LGBTQ+ campus supports for 20+ years; most recently around inclusive healthcare and restrooms, mentoring efforts, and educating coaches and faculty about LGBTQ+ issues, among others. She serves as LGBTQ+ Faculty Working Group co-chair and increased Center ties to the West Philadelphia neighborhood through several ongoing partnerships. Outside of the Center, Erin co-founded White Educators Committed to Anti-Racism and Equity (WE-CARE) to support white employees addressing racism, convenes the campus-wide DEI group, and is an Adjunct Assistant Professor at Penn’s Graduate School of Education and affiliate faculty with Gender, Sexuality, and Women’s Studies/Center for Research in Feminist, Queer, & Transgender Studies.  Erin was recently named a member of the inaugural class of Pennsylvania’s Pride Power 100 by PA City & State, one of the inaugural Metro Philadelphia’s Pride Power 100, and has won four Models of Excellence Awards, Penn’s highest staff honor.

Erin earned her BA from the College of Wooster, MA from Penn State, and PhD from Penn.  She is on the Board of Directors of A Book a Day, a child-centered West Philadelphia nonprofit dedicated to generating arts-related opportunities for children that reflect their diversity and realities through book donations, author/student dialogs, and project-based learning. Erin and her wife Amy live in West Philadelphia with their two kids and adorable dog. 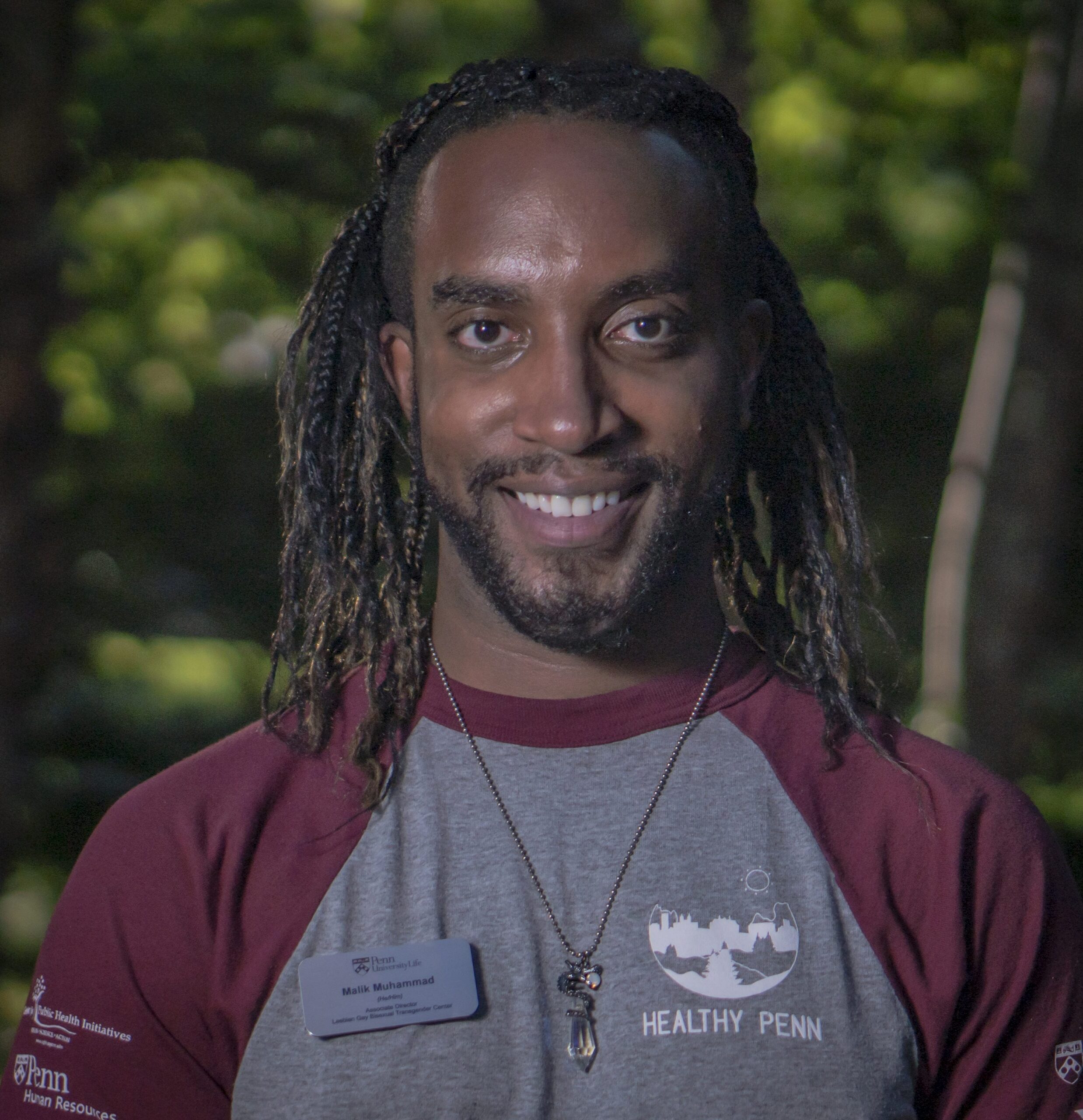 Malik Muhammad is an Associate Director at the LGBT Center. A Philadelphia native, Malik holds a Bachelor’s degree in Psychology as well a Master’s degree in Higher Education Counseling and Student Affairs from West Chester University (WCU) of Pennsylvania. A proud brother of the Pennsylvania Tau Chapter of Sigma Phi Epsilon Fraternity, Malik’s passion for social justice began at an early age as  the son and grandson of phenomenal change agents in the Philadelphia African American Muslim community. That passion was reignited and started to flourish during his six-year academic and para-professional career at WCU. There he came to realize the deep significance of LGBTQ+ advocacy, education, and working with an intersectional lens at the higher education level and in all walks of life. Now, years later, Malik is a change agent himself. At Penn, he diligently works to support students, faculty, staff, alumni, and community members spearheading the Center’s educational programs, advising LGBTQ+ student groups, and fostering collaboration across the University with various other roles. Malik also serves the Philadelphia community as a member of the Penn Center for AIDS Research Community Advisory Board, the Colours Organization Board, and as a talented local artist/entertainer. From the moment you meet him, Malik’s genuine, energetic, and optimistic nature is undeniable and often, quite contagious. If you haven’t already, find out for yourself! 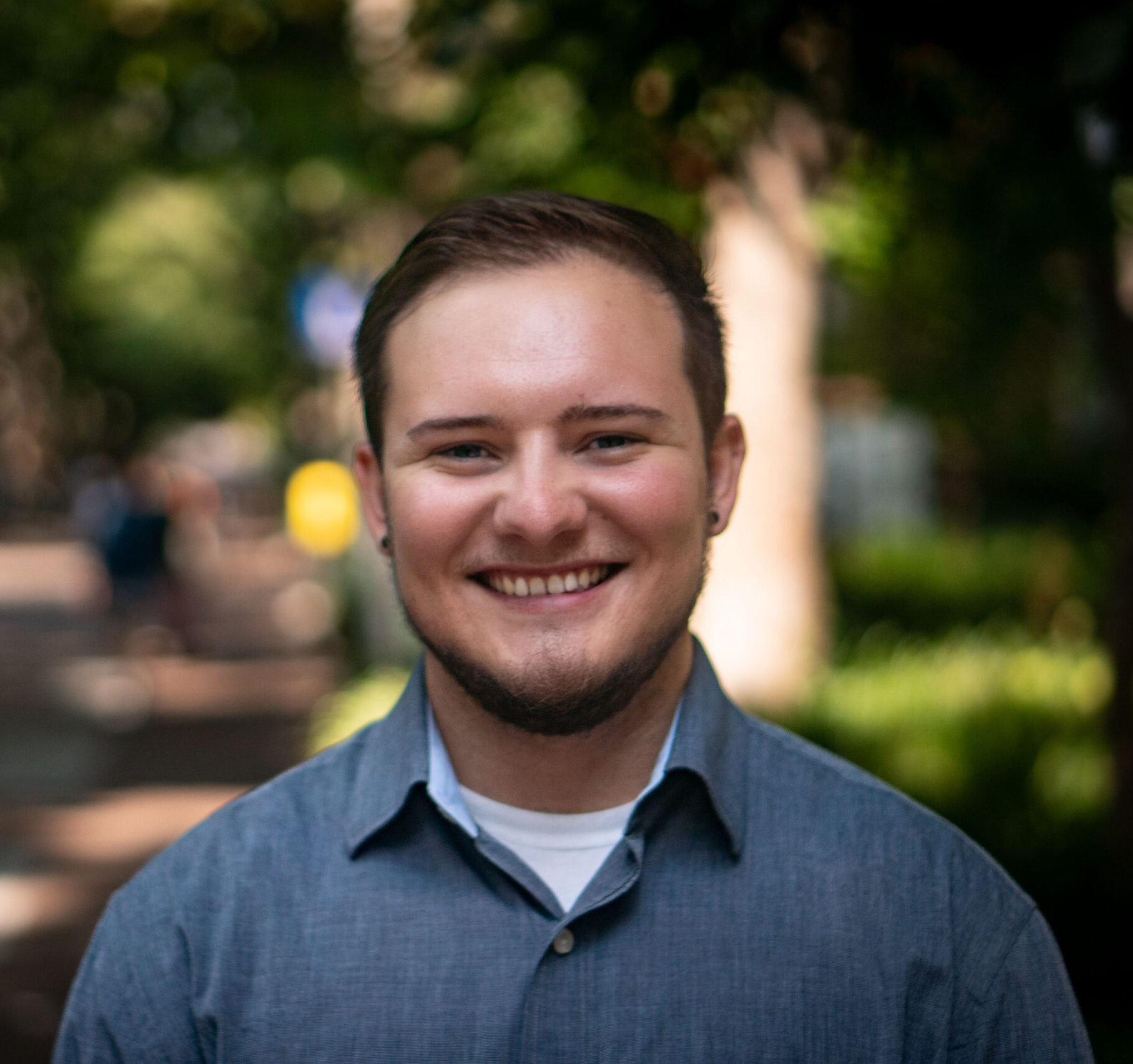 Jake Muscato is our newest Associate Director at the LGBT Center. Originally from Lancaster County, Pennsylvania, Jake’s passion for LGBTQA+ advocacy began when he started his high school’s first Gay Straight Alliance club shortly after discovering his own queer identity. From there, he attended West Chester University (WCU) of Pennsylvania, studying political science and women & gender studies.  While at West Chester, Jake was an active leader in the LGBTQA+ community working as a peer educator and presiding over the student run LGBTQA+ organization. After receiving his two bachelor’s degrees from West Chester, he served as an Americorps Member with City Year, supporting youth through mentorship, education and advocacy in the Philadelphia public school system. Most recently, Jake has been working in child welfare in Philadelphia, helping youth and families navigate foster care and adoption. In starting this new role at Penn, his goal is to create an environment where everyone feels welcome to be their authentic selves. Jake focuses on programming for trans and non-binary communities on campus, as well as supporting graduate student groups, and revamping the Center’s mentorship program. As a member of the trans community himself, he believes in the importance of using his personal experience to continue a conversation about the needs of the trans and non-binary community at Penn and the greater Philadelphia area. 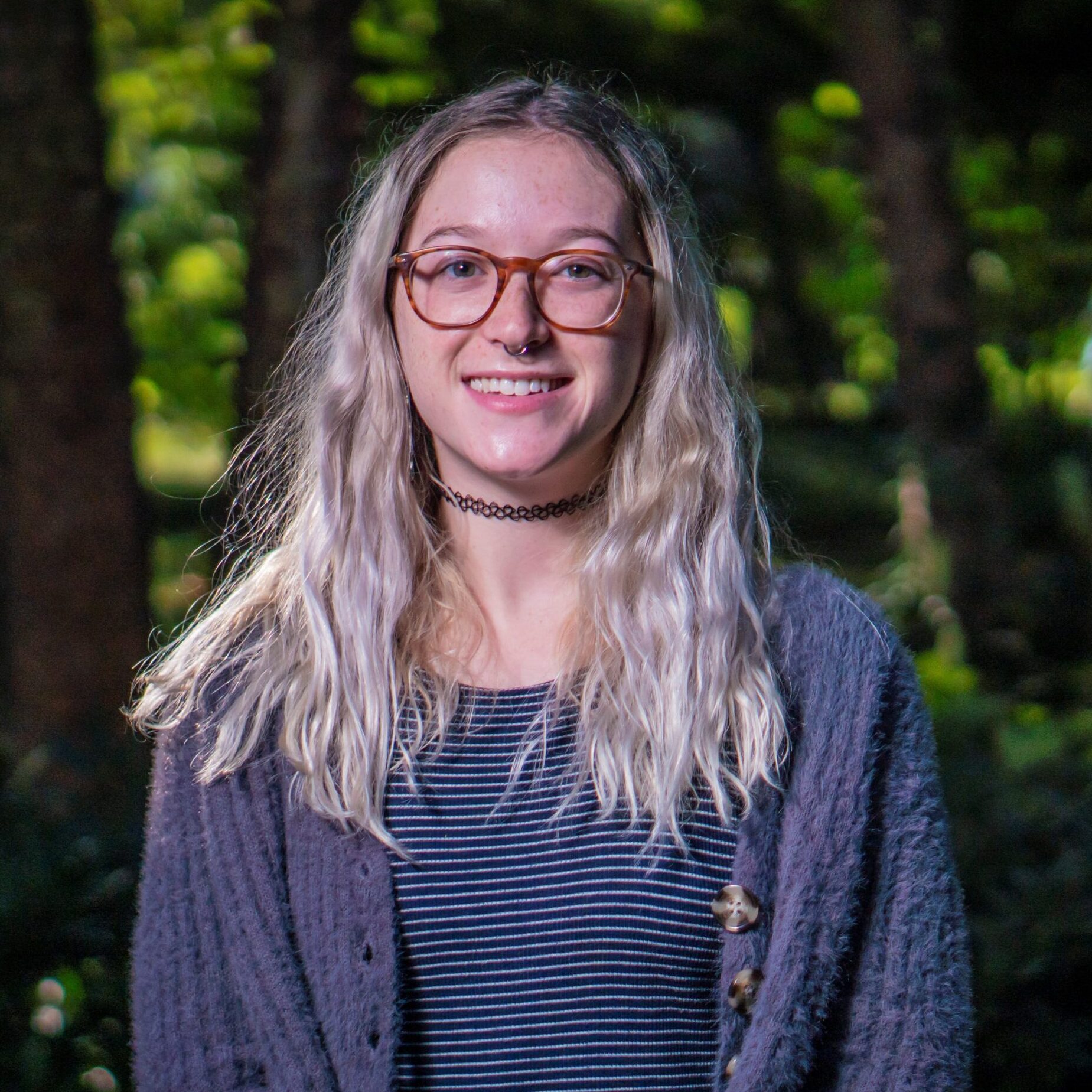 Morgan Allgrove-Hodges (she/her)
Morgan Allgrove-Hodges is a Connecticut native from outside of Hartford. She graduated with her B.A. in English and Sociology from the University of Connecticut and is currently a first year master’s student in the School of Social Policy and Practice studying Social Policy. Her research interests are in urban studies and public transportation equity. She also enjoys rock climbing, going to concerts, traveling, and talking about her Subaru. 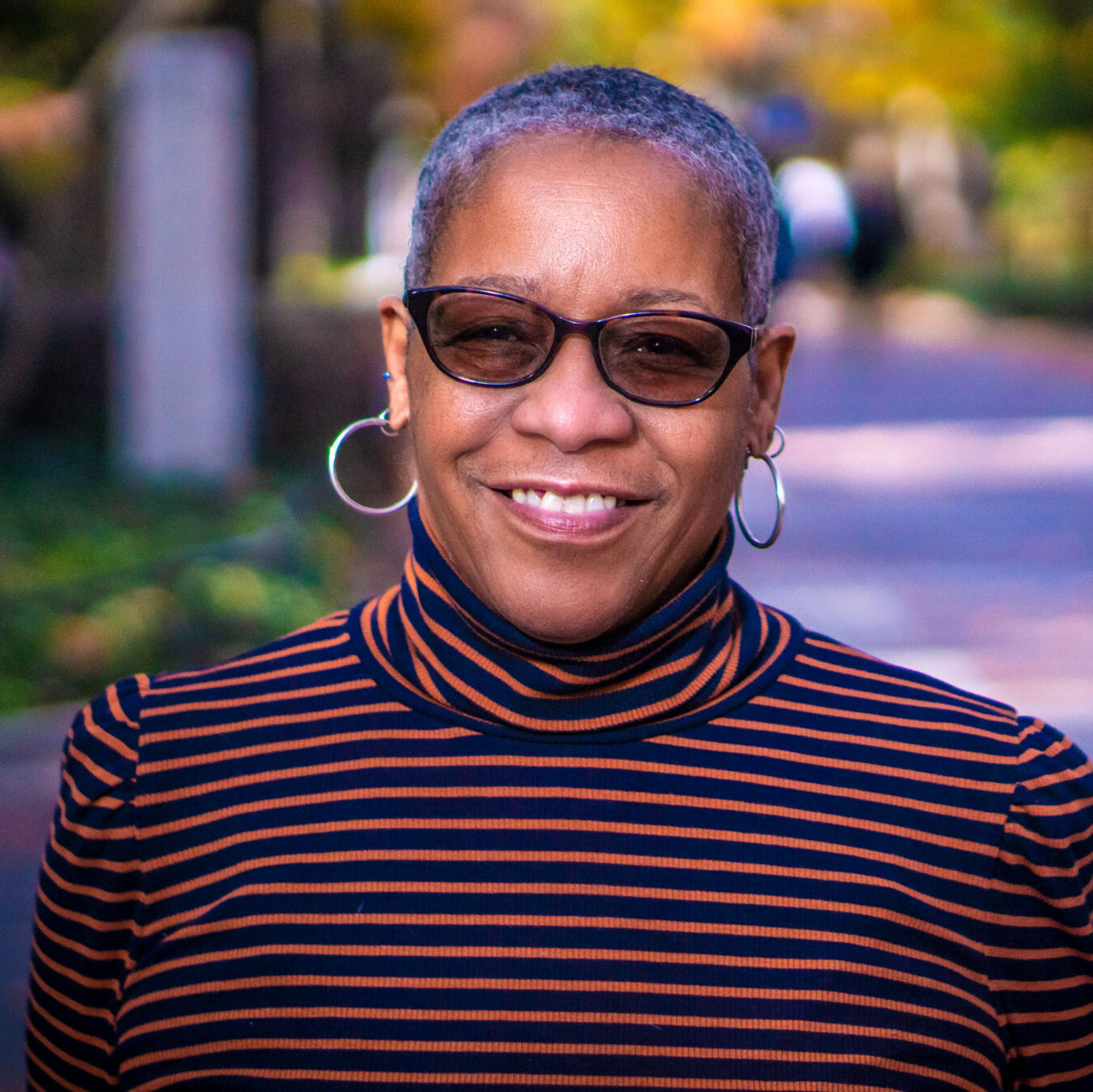 Jan Kee-Scott (she/her) Business Administrator
Jan in the Center’s Business Administrator. She takes amazing care of us and ensures the money goes where it needs to go. Although her office is in the Office of Student Affairs because she works with other Penn officestoo, we could not function without her knowledge and expertise. Jan is also an early bird who enjoys traveling and hot yoga. 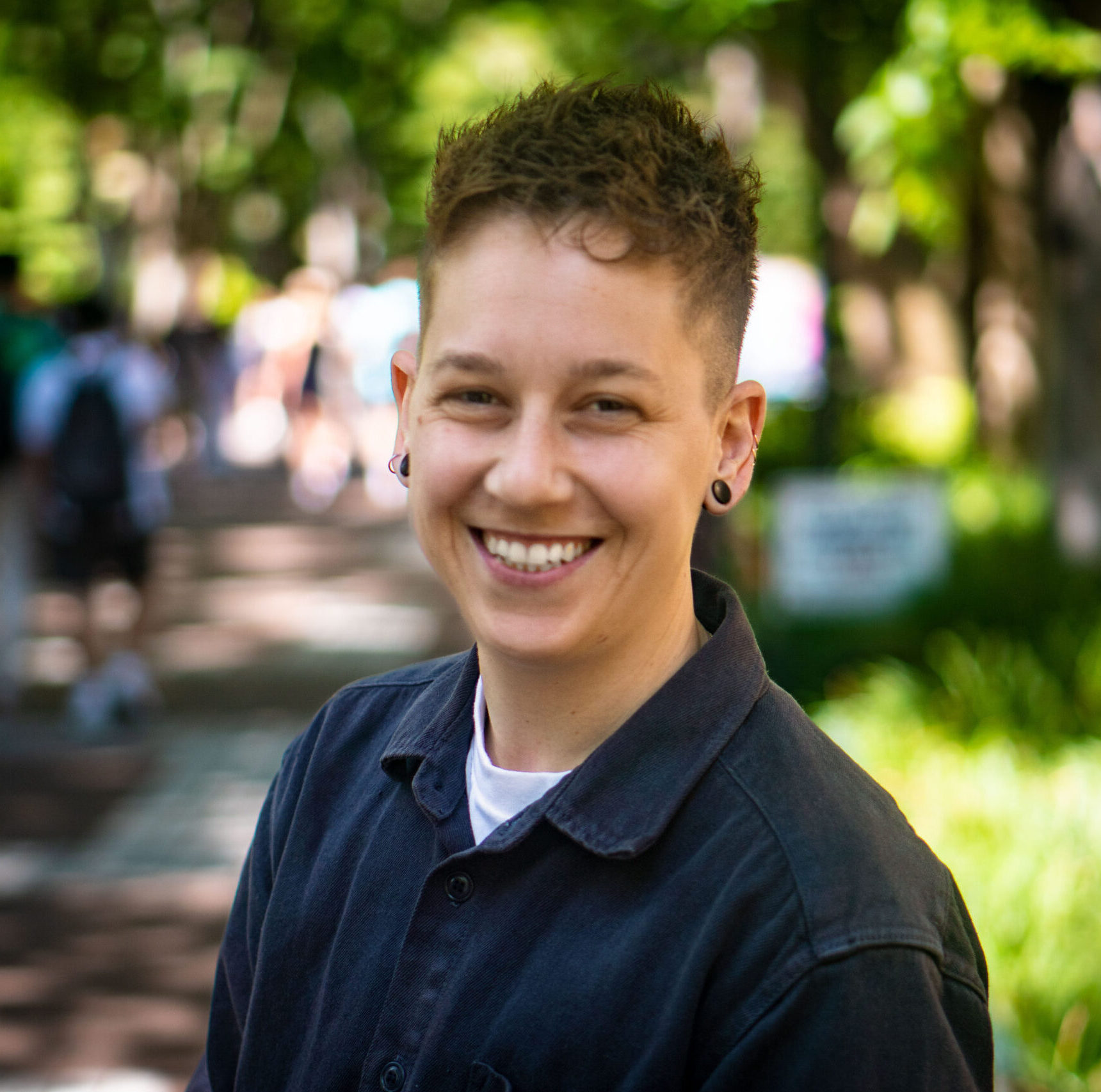 Wesley Alvers (they/them)
Wesley Alvers (they/them) is currently a second year MSW student at the School of Social Policy and Practice and is one of two social work interns at The LGBT Center. They have spent the most recent years of their career as a counselor at an Oregon-based abortion clinic and are looking forward to jumping back into the world of reproductive health equity. Along with a focus on abortion access, they are excited to celebrate the trans and gender expansive community both on Penn’s campus and within the broader Philadelphia area. They live with their wife and cat, both of whom are cooler than Wes will ever be. If you want to talk with someone about reproductive justice, gender, life, love and/or the pursuit of the greatest snack foods, Wes is here. 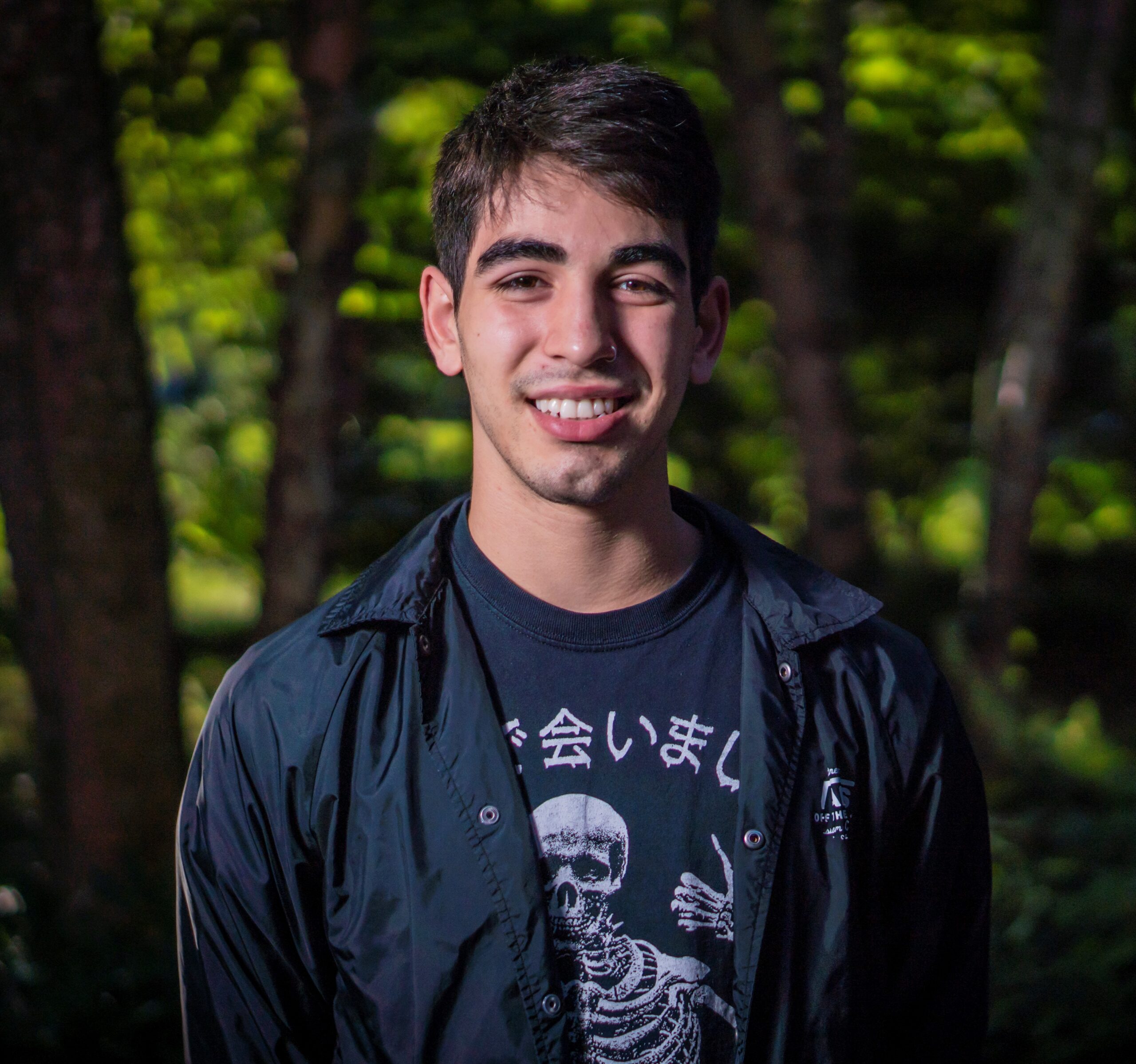 Matthew Bolbolian (he/him)
Matthew is a Senior in Wharton from Southern California studying Management and Decision Processes, and once he graduates in the spring, he hopes to return to the Los Angeles area to pursue a career in Media & Entertainment business. Outside of his work at the center, Matthew is involved on campus in MUSE, Wharton Council, and the Cipactli Latinx Honor Society. In his free time, he loves exploring Philly's food scene, cooking for friends, running, dancing, and gaming. 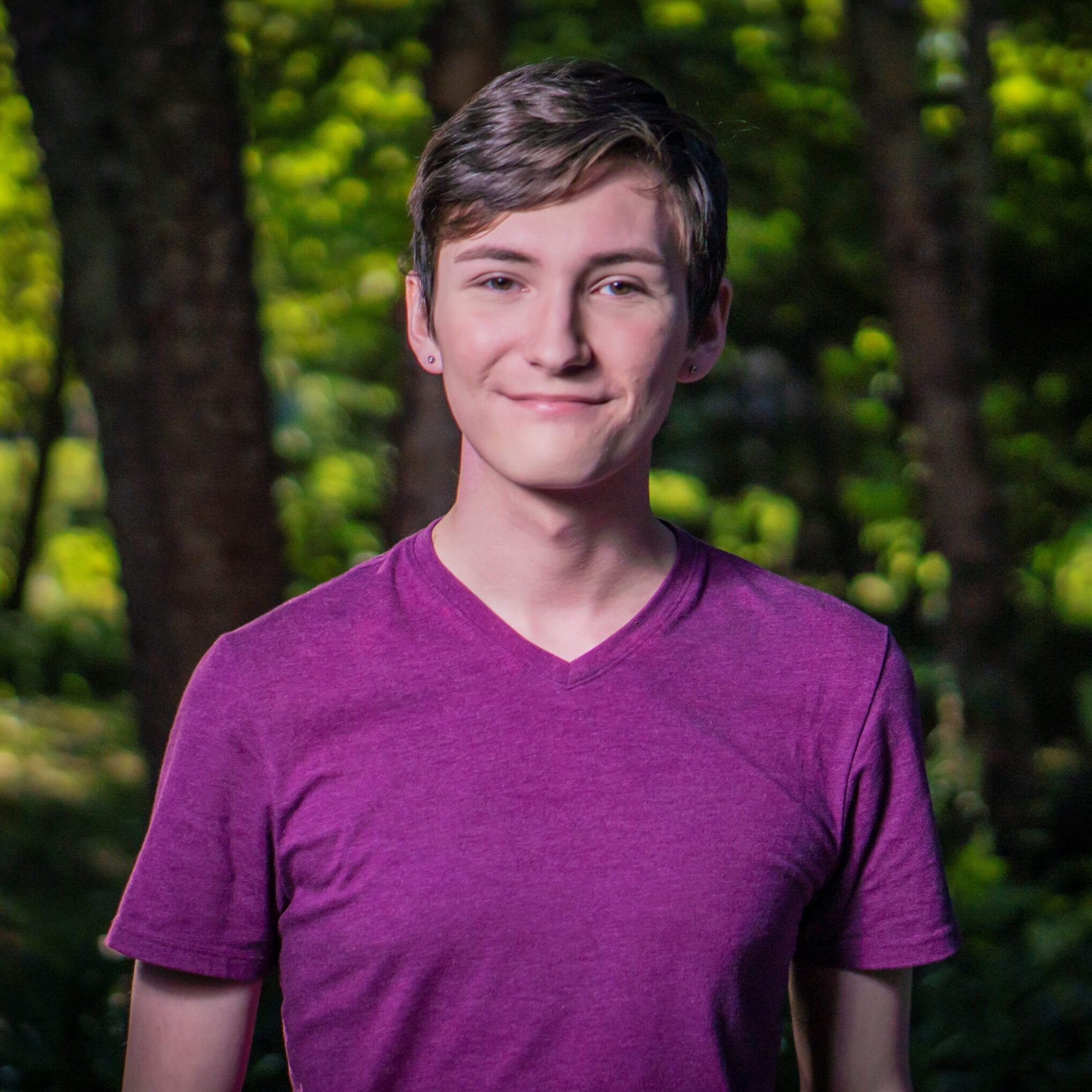 Justin Roberts (he/him)
Justin is a Senior in the College studying Economics and Political Science from Central California. He is a pre-law student who wants to use his knowledge and experience to help others through work in public policy. In his free time, he plays the clarinet with the Penn Band, bakes, games, and watches various Marvel productions on Disney+. In addition to the Center and band, he is involved with QSA, PORES, and Penn Leads the Vote 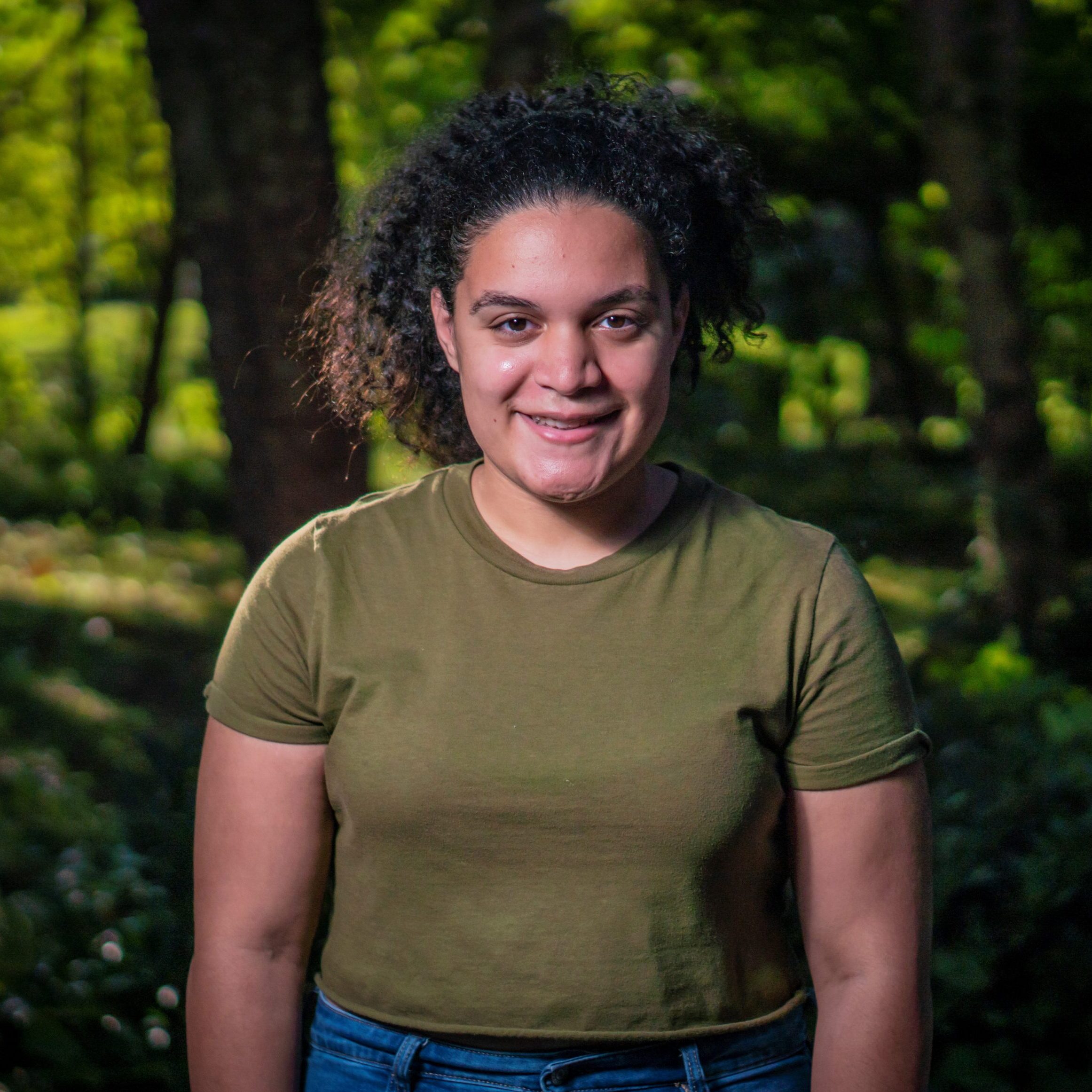 Emily Orengo (she/her/hers)
Emily is a Junior in the College majoring in Neuroscience with minors in Chemistry and Psychology. She is a pre-med student who wants to use her passion for science to help others. A South Jersey native, she enjoys going to the beach and walking her dog on the boardwalk. She also enjoys baking, working out, watching medical dramas, and playing video games on her Switch. 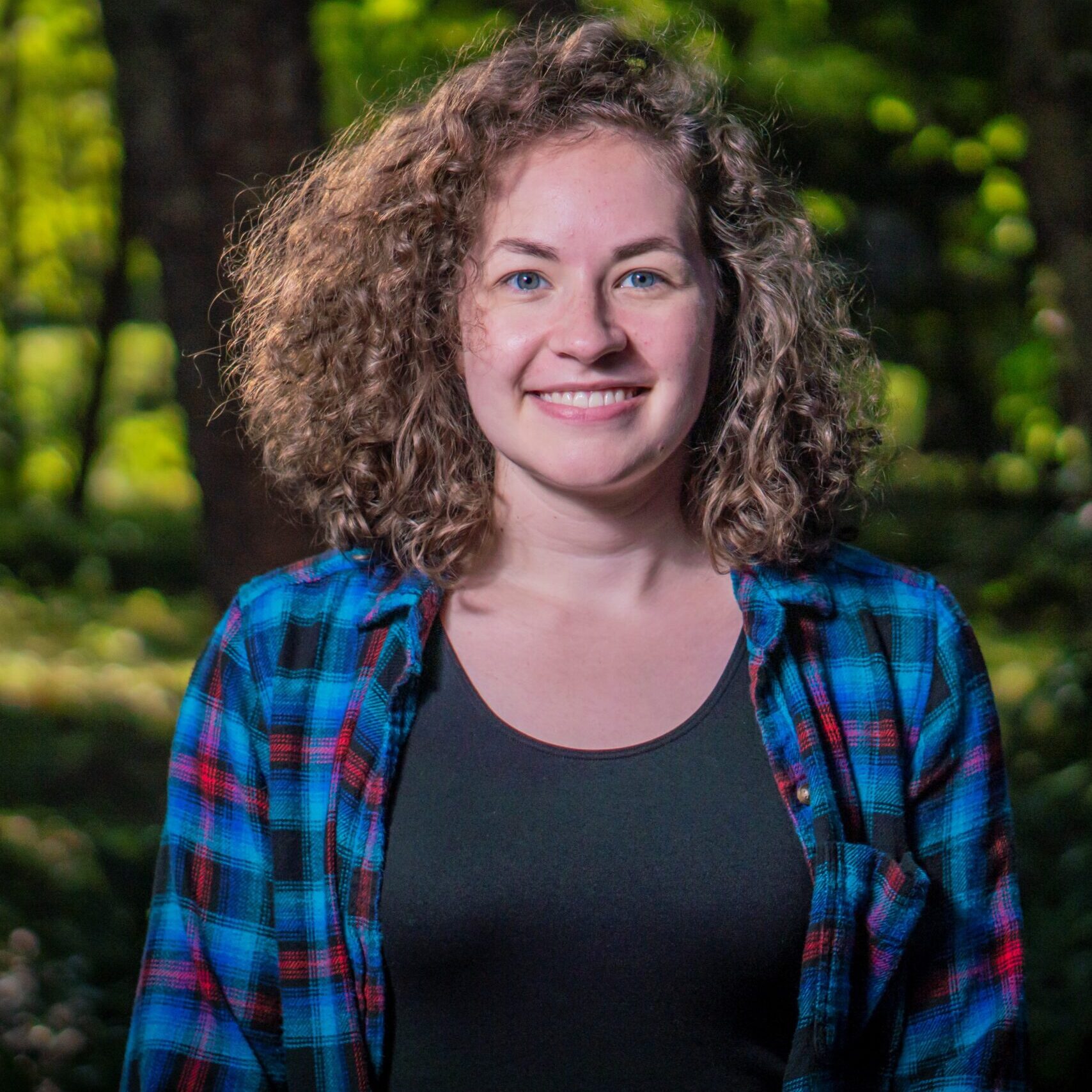 Juliana Vollmer (she/hers)
Juliana (she/her) is a Junior in the College studying Psychology and minoring in Nutrition Science. She plans to use her experience as a low-income, neurodivergent student to inform her career in clinical psychology. She also plans to bring more financial wellness knowledge, mental health awareness, and neurodivergency inclusion to the LGBTQIA+ and Penn communities. In her free time, you can find her strolling around campus, working out at Pottruck, watching animated shows, or eating any number of delicious foods! 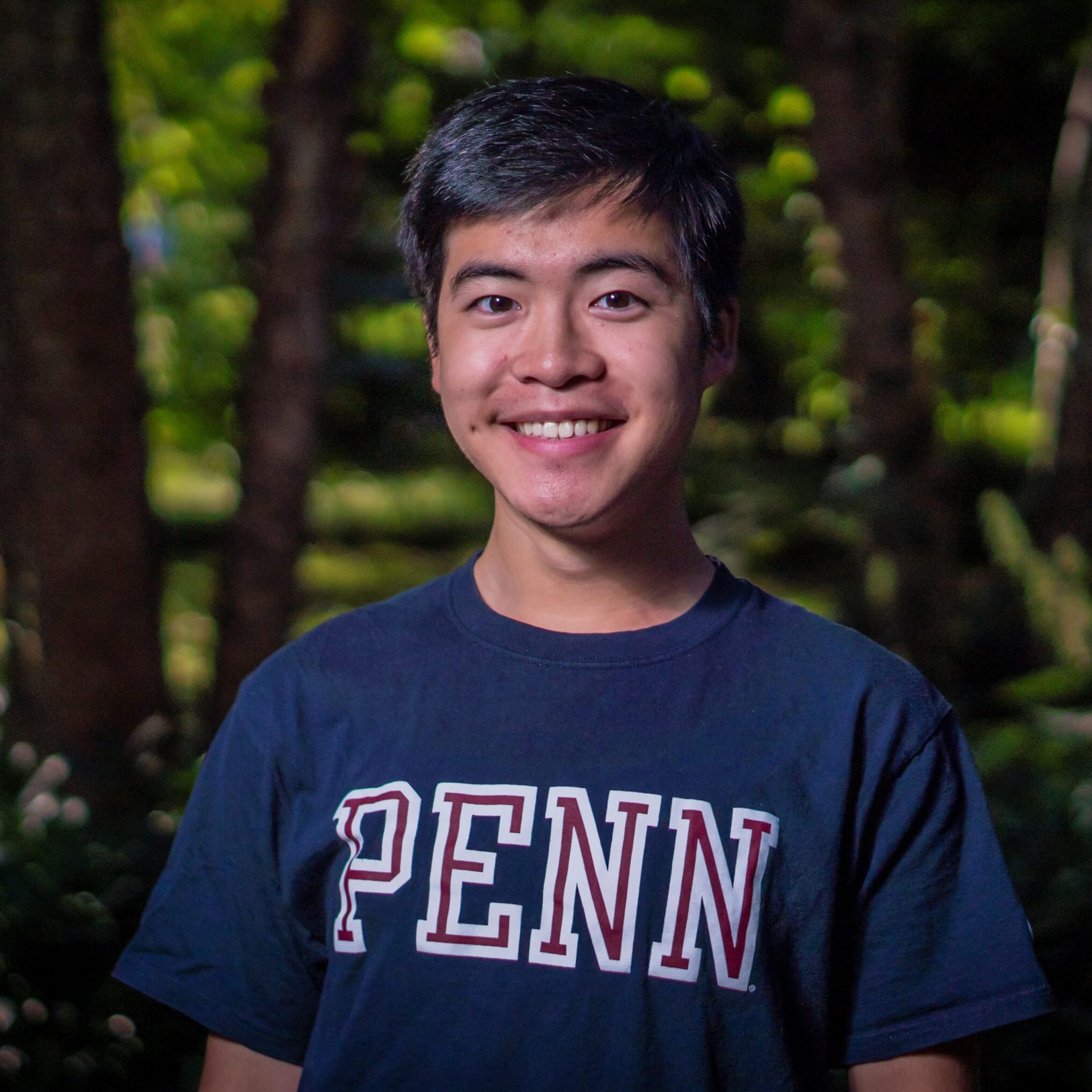 Xandro Xu (he/they)
Xandro Xu is a Sophomore in the College studying Neuroscience. He is passionate about I’m passionate about diversity & inclusion, LGBTQ+ advocacy, the arts, and social impact through entrepreneurship. Outside of working at the Center, Xandro is a clarinetist in the Penn Symphony Orchestra. He also loves to take photos, travel, and listen to podcasts. 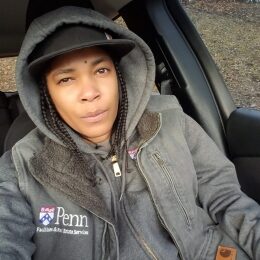 Tayondra Williams (she/her) Service Mechanic
Philly native Tayondra, also known as Tay, is our building’s service mechanic. She has been employed at Penn for ten years and loves fixing things. Outside of work Tay enjoys spending time with her wife and son. If she’s not at work or with her family, she’s probably somewhere reading a book. Her all time favorite novel is “The Great Gatsby ” by F. Scott Fitzgerald. 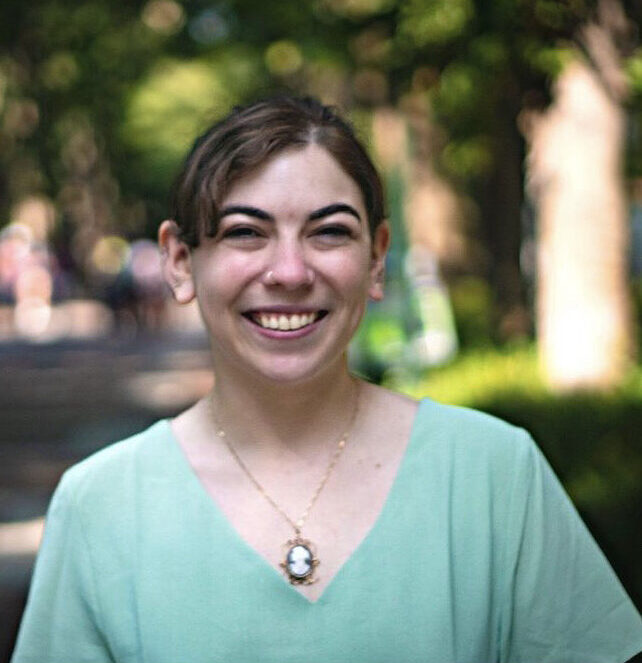 Zoe Stoller (she/they)
Zoe Stoller (she/they) is a social work master's student at Bryn Mawr College, and one of two social work interns at Penn's LGBT Center! Zoe received her undergrad degree from Penn in 2018 and was involved in the LGBT Center as a co-chair of J-Bagel -- so they are very excited to be back at the Center again as a more fully-realized, and even queerer, version of herself. In their personal life, Zoe runs a thriving social media account (@ZoeStoller on Instagram and all other platforms), where she spreads LGBTQ+ education, mental health visibility, and overall authenticity -- and they are thrilled to be able to bring this same passion and excitement to working with the LGBTQ+ community at Penn. 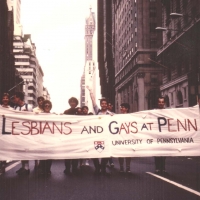 Penn is proud to be the home of the second oldest LGBTQ+ center in the US (the University of Michigan was first). What eventually became the Lesbian Gay Bisexual Transgender Center (Center) was created in 1982 followed several homophobic campus incidents, including the severe beating of a gay sophomore by a fellow student. Student leaders and several progressive administrators took action by hiring founding director Bob Schoenberg to work three days a week as a point person for lesbian and gay concerns (there was no mention of bisexual or transgender people at that time) via Student Activities in Houston Hall.

When the Student Activities office restructured, the program moved to 3537 Locust Walk, eventually acquiring the entire third floor.  Although he had assistance from a few work-study students and eventually a half-time staff person, more help was needed.  In fall 1998 a second fulltime position was filled and by 2002, the Center was granted a third staff member; a staffing pattern which holds true today.  Meanwhile, the Center’s name grew as well, including ‘bisexual’ in the late 1980s and ‘transgender’ in 1999.

In October 2000, Penn President Judith Rodin announced a major gift to the Center from David Goodhand, C’85 and Vincent Griski, W’85. At the same time, the University committed an entire campus building to become the LGBT Center’s home. With this gift and ensuing donations from many alumni and friends, the exterior of the historic 1870s Carriage House was restored and the interior was gutted and redesigned providing two floors of space for the Center and its affiliated student organizations, making it the physically largest LGBTQ+ center in the nation.

After 35+ years, we are incredibly proud of the Center’s progress and status as an invaluable campus resource. That said, we are constantly working to better serve the ever-changing and diverse LGBTQ+ community.